Netregistry has no support for MFA either

Namecheap has recently come under fire

This post entitled “Namecheap still doesn’t support 2FA in 2017” has attracted a lot of attention recently.

It made my blood boil because there really, really is no excuse for it.

Netregistry is one of Australia’s larger suppliers of domains. They’ve consumed a lot of smaller companies and if you have a .com.au domain, there is a reasonable chance you are using them even if you don’t know it.

I went and logged in to check my MFA, was surprised I didn’t already have it running, and ended up looking for where to do so.

Eventually I logged a support case, adament it was probably a case of me not looking hard enough. When that case never got a response, I opened a live chat. I’ll let it speak for itself. 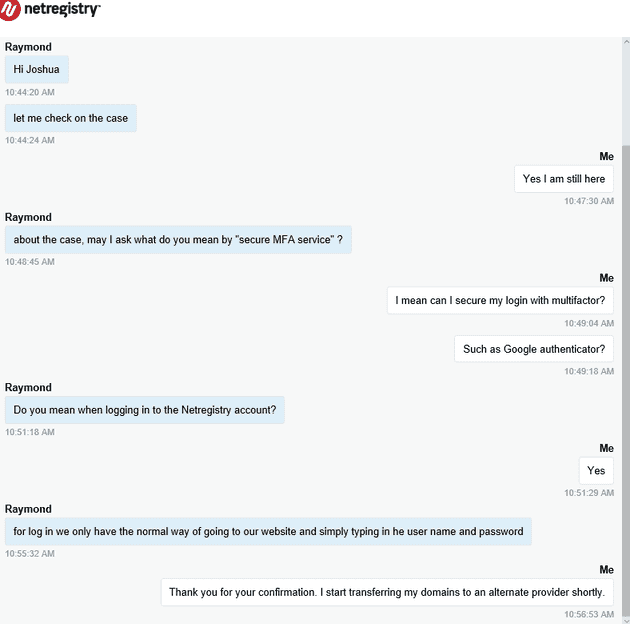 We are all guilty

There is an ongoing theme in the security community. You complain about something being bad. You write a blog telling people how bad it is.

Then you sit around and lament the badness.

I’m not going to start a Twitter campaign. I’m just going to vote with my feet. My domains are being transferred.

Amazon of course, fully supports MFA. Unfortunately, I have a few more days until I can move the last of my domains, Get Cryptolocker, due to ICANN’s new 60 day policy.

Netregistry - no MFA support, no shits given

Unlike Namecheap, which at least apparently support SMS, Netregistry don’t support anything..