An article by Igor Kromin has provided an insight into a practice by GoDaddy involving injecting Javascript into customer sites. Several people expressed interest in a breakdown of the script - so here it is. Please review Igor’s original blog for further background

Despite this having blown up just this week, GoDaddy have clearly been doing this for a while. Here’s an apparent copy of the code dated September 4, 2017: Your Javascript. It predates any other mention of the code, such that I have to wonder if it involves the original developer.

You can also enjoy seeing an ARG that were thrown off by it in September 2018: Game Theorists Thread. Alternatively you may enjoy seeing a malicious site that shipped with this code in a sandbox

I’ve built an empty website and copied the tracking code onto it. You can find the source in this repo. There’s a commit for every major step if you’d like to play along.

The good news is, uBlock blocks this tracking by default. By disabling uBlock, you can get a view of exactly what this script is doing. You can see the callout in the network monitor below, along with the long list of information it provides.

It’s obvious a lot of this is performance related, but at this point, I can’t account for every parameter. 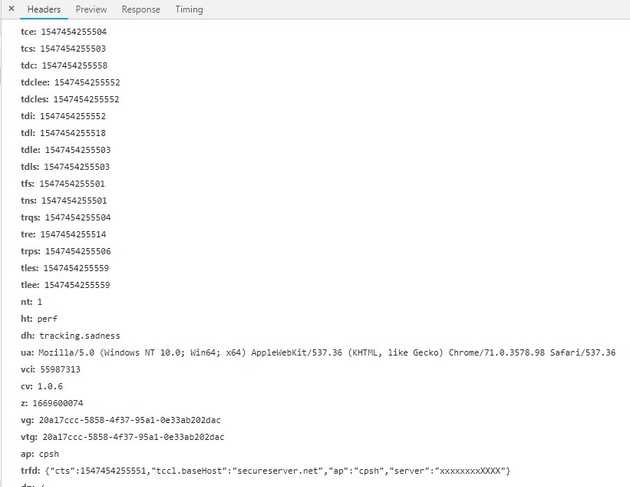 The script is interestingly worked. It’s minified, in that all the variables are garbage. However, several comments remain. There’s a source map referenced:

But it doesn’t appear to exist online. We can’t be surprised about this for code that’s published online, but it never hurts to look.

So our first job has been to run it through prettier, to make it nice and readable. This makes no actual code changes, and can be seen on the initial commit.

This acheives quite a bit on its own.

Javascript gets a lot of crap, but it doesn’t get nearly enough crap specifically about the IFFE. Refactoring to remove the outer IIFE makes the code a lot more readable. It also moves all the functions to the global space. You generally don’t want that, but for us, it means we can access everything directly from the browser. Below you can see that the entire codebase is about exporting three different functions, noting we just wrote a() and b() ourselves. 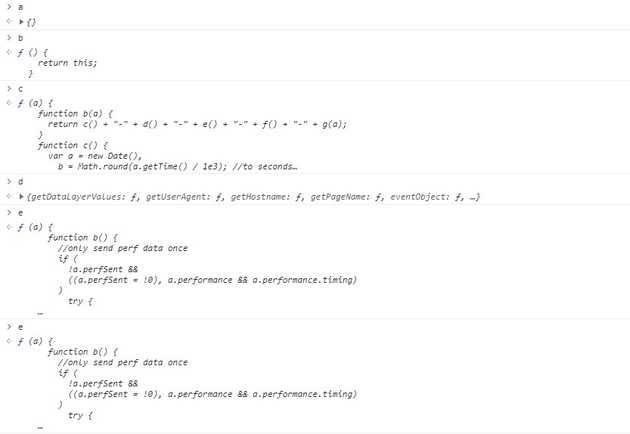 Let’s skip to line 7 of the original codebase.

I hesitate to describe this as “functional” because of getTime(), but you can see this function doesn’t use any external variables, and takes no input. So we can safely play with it.

Produces the same ten console logs every time. But if you keep running c(); from the console, you get a different eight values. Let’s just call this whole thing an eight character pseudorandom.

Line 18 looks very similar, in fact there’s a comment telling us what happens.

d is similarly a pseudorandom function, but this one appears guaranteed to generate four numeric characters.

It turns out we have five different randomness functions just to feed:

tl;dr Everything down to line 61 does just what it says, provides a function that generates a GUID. You can play with this in the Chrome console:

I included the second example to show it doesn’t seem to matter what parameter you feed it. It does impact the algorithm used to generate the last set of numbers, where that parameter is ‘a’:

With that massive tl;dr out of the way, I’m going to replace the whole of c() with a GUID function pulled off SO here:

We’ve reloaded and run our console test, so by this commit code is looking a lot easier.

This exists in a few places:

I’ll be blunt, I can’t work out what this does, but I don’t believe it’s significant in the browser. If a node person wants to add input here, please do.

You can cheat with this function by looking at the return, where you’re shown this is basically a class with a series of functions. By using the known names to rename each function, we can make it a lot more readable.

This was harder than it should have been, because single letter variables are used many times, and sometimes they are the variable you want. And sometimes they are shadowed in scope. And Javascript responds to all those things by just doing nothing and having no errors.

A nice solution here is.. run it through the Typescript compiler. No types, no effort into anything, except for where it easily tells you this commit is necessary to fix things.

If you think Typescript is just about making people write types.. moments like this make me think otherwise.

With that in place, most of function d() is self explanatory. The _eventObject() function does however look pretty interesting.

There’s something odd going on in a big try/catch block. If you look at this code, you get a sudden understanding of the intent for every non-obvious parameter supplied to the tracker from the initial screenshot.

Happily blowing away our function when done. Let’s remove and the associated ‘if’. We’ve got one more IFFE to make sensible, and then i’ll reprettify the whole thing.

As of this commit, we know we’re basically dealing with our new “trackrun” function, which uses the already reviewed functions to generate performance and tracking information.

Based on the above, we can break down the following which is sent to GoDaddy’s servers after visiting an infected website. You may be interested in the performance API for some of these details.

The two cookies stored by this code are _tccl_visit and _tccl_visitor, both which appear to hold a GUID referencing your user.

The minifier here made extensive use of unintelligible hoisting rules - variables were usually declared below where they were used, or assigned in different functions. Breaking something never produced any warnings or errors, the browser would just say “this is fine” and not execute the function.

I’ve done some rearrangement to make this cleaner, and cleanup will continue on the repo. That said, it’s in a state I feel you can confirm the script works as advertised: it tracks the user on the site, and it sends performance data as per the above information.